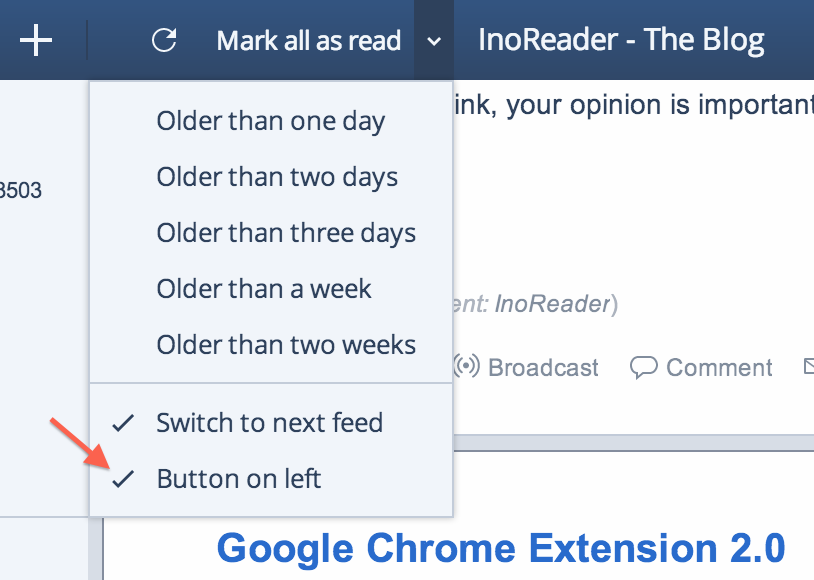 Today is the third day since our last major update. The community response was huge (Thank you all!). Apart from the blog comments, our Forum, Twitter and Facebook page, we have been literally flooded with emails from our internal feedback form.
Of course there were complaints about some of our decisions.

Today we are releasing version 7.3 which aims to address those complaints.

Mark all as read button placement

Most of you didn’t like the new place of on of the most important buttons. Indeed on large screens it was too far away from your focus point. We have many reasons to place it where it is now, but we understand the usability issue. So today we are introducing a new option to move the button to the left. We have also reverted the button caption to “Mark all as read” to avoid further confusion.

The second most wanted change was to increase the contrast of current themes. Since not everyone agrees with this, we have again made it as an option, so you now have the so called Contrast mode in your disposal. You can find it in the “eye” menu or in Preferences -> Interface -> Style.
Here are two screenshots demonstrating the difference in the our dark theme:

Highlight updated subscriptions in tree
One feature exclusive to InoReader is the highlighting of tree sections when there are new updates since you last opened them. This color was also a big distraction for some, especially after we introduced the red color for feeds with issues.
In the process of redesigning we have removed the coloring in favor of bolding the unread counters. However on some displays and configurations this turned out to be a very inefficient.

Now we are bringing back the highlighting with an option to turn it off: There are other significant changes in this version too.

As always with so many changes it’s possible for a bug to come alive. We are testing extensively our releases, but if you find an issue or you have any suggestion, don’t hesitate to contact us.
—
The Innologica Team