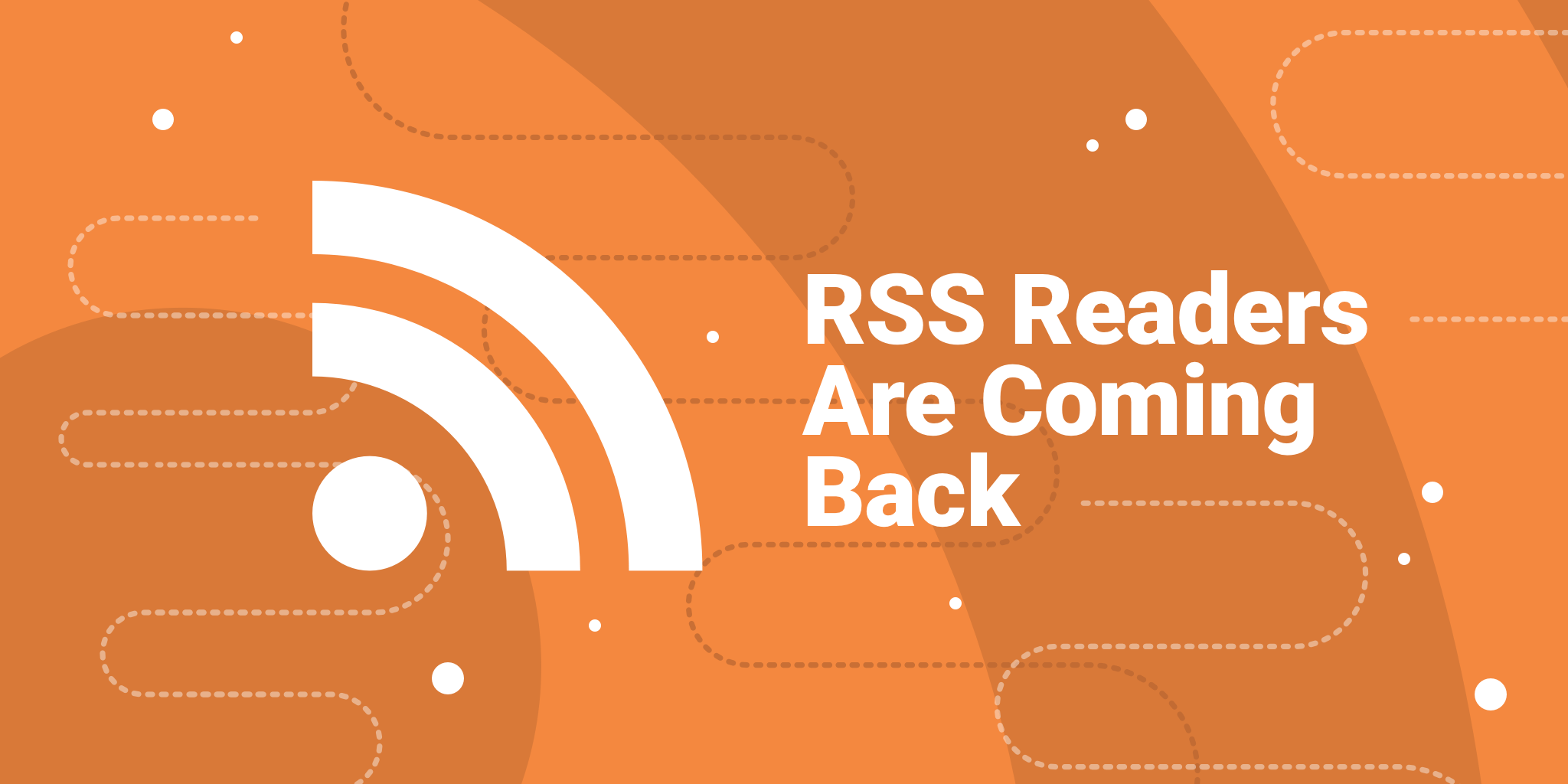 It’s a safe assumption that if you’re working in an office, there’s a fair amount of reading you have to do as a means to stay abreast of industry trends and improve your skill set. Something that used to be once easy, but has drastically changed due to the increase of news sources. Plain and simple, we can’t go on glutting ourselves on information without consequences and there’s been a strong movement in recent years to cut down on information consumption.

Our digital diets, consisting of multiple social media feeds and a long list of websites, consume not just our daily hours, but our ability to focus and perform our jobs. It’s no surprise then that in this climate, RSS readers have been making a comeback. The tides have shifted and now attention is going back to one of the pioneering technologies of the early Internet.

Technological innovation rarely charts a straight line – though many imagine it so – and often tech will go out of fashion, but never truly become forgotten. Often repurposed and reinvented, certain concepts and tools are poised to step out of the shadows and into sweet, sweet relevance once more when the moment is right.

The moment is certainly right for RSS, which never truly disappeared into obsolescence even after being decidedly replaced by social networks. Social platforms seemed to perform RSS’ function as well as introduce connectivity between users. However, with the abandonment of chronological feeds and the creation of echo chambers based on opaque algorithms, RSS once again re-emerges in popularity.

Just as many never stopped using RSS in the first place, others are now discovering its usefulness.

RSS as a protocol

The RSS protocol is a really simple piece of programming. It’s even in the name. RSS stands for ‘really simple syndication’ and its purpose is to trim the extra steps when browsing multiple sites. Forego the constant rotation between landing pages and opt for a single channel that funnels all new publications from your favorite sites into one ‘feed’. You don’t have to click more than once to discover what’s new in your RSS feed reader. The first generation of RSS feed readers was marked by Google Reader (RIP, you will be remembered!), which truly defined an era in the digital lives of a whole user base.

The core concept of simplicity extends to user experience as a whole. RSS strips down individual articles and posts from multimedia and formatting, and reduces all content to its base components generated within simple text files in minimalist outline. Posts in RSS would have a title, link to the website and a summary or the first paragraph of the article. Users are then enabled to quickly skim through new updates and click only on those of interest. RSS is one of the first forms of online curation.

RSS readers began their existence on the web browser as a natural extension of your life online. It made sense, because why would you need a separate application for browsing sites. RSS readers continue to support the old-school browsing experience, but almost all have also evolved into apps – a necessity born out of the ubiquity of mobile devices. The only outlier for this trend is The Old Reader, whose whole point is to keep alive the spirit of old RSS and that means you enjoy a very no-frills interface.

Inoreader is a prime example of RSS readers, which successfully support service on web browsers and apps for Windows Phone, Android and iOS. There’s a reader for every type of user. Are you invested in software specifically developed for Apple devices? Turn to Fiery Feeds and lire, which actively reconceptualize the capabilities of RSS readers for iOS. If you’re required to monitor news headlines by the minute, then NewsBlur is your natural choice. This RSS reader shines with special tools to circumvent the usual problems of following too many feeds. For professionals immersed in Twitter as their main source of information from experts and trusted sites, there’s Feedbin – an RSS reader with support for Twitter subscriptions.

As you can see there’s no shortage of clients and services available. Paid or unpaid.

RSS readers are the new must

Long live RSS! We are quite delighted at the longevity and resilience of the humble RSS reader, even if the industry at large is incredulous at their impending comeback.

Dave Winer, one of the people who stand behind the creation of RSS, told WIRED, “I can’t really explain it, I would have thought given all the abuse it’s taken over the years that it would be stumbling a lot worse.” It’s an opinion widely shared by others of his peers and colleagues, though it shouldn’t come as a surprise to anyone.

After all, the Internet has always belonged to RSS in some form or another – we just didn’t really pay attention. Follow us down the rabbit hole as we explore why companies at the top of their field today consider RSS readers as essential in their tool set.

RSS, as any early innovation of the Internet, reached its zenith, burned bright and faded away into obscurity. But where other technologies went obsolete, RSS refused to surrender and it’s now the basis for a lot of conveniences we enjoy to this day.

RSS is the grandfather of all ‘feeds’ widely used by social media platforms, newsletters, YouTube channels and podcasts. You wouldn’t be able to subscribe to all your favorite podcasts on Spotify, if it wasn’t for the foundational nature of RSS.

RSS readers continue to survive and evolve to this day, though many wrote them off after Google Reader and Digg Reader met their highly publicized demise. Current clients and services maintain the original service alive – an unfiltered glimpse at the wild expanse that is the World Wide Web. You’re still in the driver’s seat when it comes to what you read and what you discover. Only you know your RSS reader is equipped with its own AI algorithm.

You might flinch at the mention of an algorithm (Facebook and Twitter raise warranted suspicions) but the chief difference between RSS reader algorithms and social media algorithms is that you’re very much still in control. There’s no advertiser to manipulate your feed to meet their sales goals for the following quarter.

RSS being on everyone’s lips in recent years has nothing to do with coincidence, but rather a shift in and dissatisfaction with the current method of media and news consumption – social media.

Raise your hand, if you dread logging into Facebook or Twitter, because you know you’re in for a rough time navigating online scandals, name calling and out-of-order information. The burnout is real and we all need a collective vacation from the mayhem.

In a sense it’s ironic how people abandon social media for RSS, because the initial response to social media platforms carried so much optimism. Here’s a fun, intuitive way to not only stay informed but stay in touch with people of interest. Organizations, companies and publications also adore them, because they have access to an in-built audience of millions of people.

Happily Ever After is true only in storybooks as social media succumbed to curation by algorithm. Facebook and Twitter abandoned the concept of ‘a chronological feed’ and users exist in a bubble that doesn’t accurately meet their needs. It’s to no one’s surprise then that overall user experience has declined and it’s this general fatigue combined with a demand for more user control that has snatched RSS readers from the maw of obscurity.

How do we use RSS feeds today

Office work and entrepreneurship back when RSS rose to prominence are a lot different from today. I can hear sighs of nostalgia from the other side of the screen. The digital information infrastructure as it is right now had not yet reached its final form. Print media showed no signs of dying, though the writing was clearly on the wall. There was no pressure to be connected to the Internet at all times. RSS readers were thus used in a relaxed and casual way, just for convenience. A way to get new posts from your friends’ blogs in one place.

As more information migrated away from analog to digital, RSS readers found themselves in the privileged position of business tools. There’s nothing casual today about the necessity to be well-read on the latest news whether they are economic, political or related to your specific industry. RSS readers efficiently handle the task of managing your reading and optimizing your time doing so, while presenting users with features and tools to organise and control their feeds.

What are the most prominent features of RSS readers?

The RSS readers of today compete against each other for the biggest share of users and the battleground is features and versatility. It can be a tough decision to choose the RSS reader that works best for you. The core technology is the same for every reader, so where they outdo each other is with their features. Automation and curation are the defining characteristics of the current generation of RSS readers.

RSS readers grant users absolute control over how they manage their feed. Group feeds by specific topic, create custom folders, customize archival options and the frequency the main feed updates – you’re the sole administrator here. Users can highlight articles, add notes and color coordinate updates by any system. Certain RSS readers have built-in several different layouts from a single feed to multiple columns on your screen. Aggregators work towards decluttering feeds further by showcasing a summarized popular story in the media right now rather than drown your dashboard with duplicate articles from different sources.

In attempts to differentiate from one another, RSS readers develop their own specific flavor. Those nostalgic for the RSS of seasons past can rediscover the simple, stripped-down experience of The Old Reader. If you’re looking for powerful integration with multiple devices and software apps, then you’re better off going for the premium profile at Netvibes.

Inoreader banks on the usefulness of research and discovery. Users subscribe to a wide variety of subjects, which curate a selection of high-profile articles within that category. This way Inoreader positions itself not just as a hub for your feeds, but also a search engine and a trusted source.