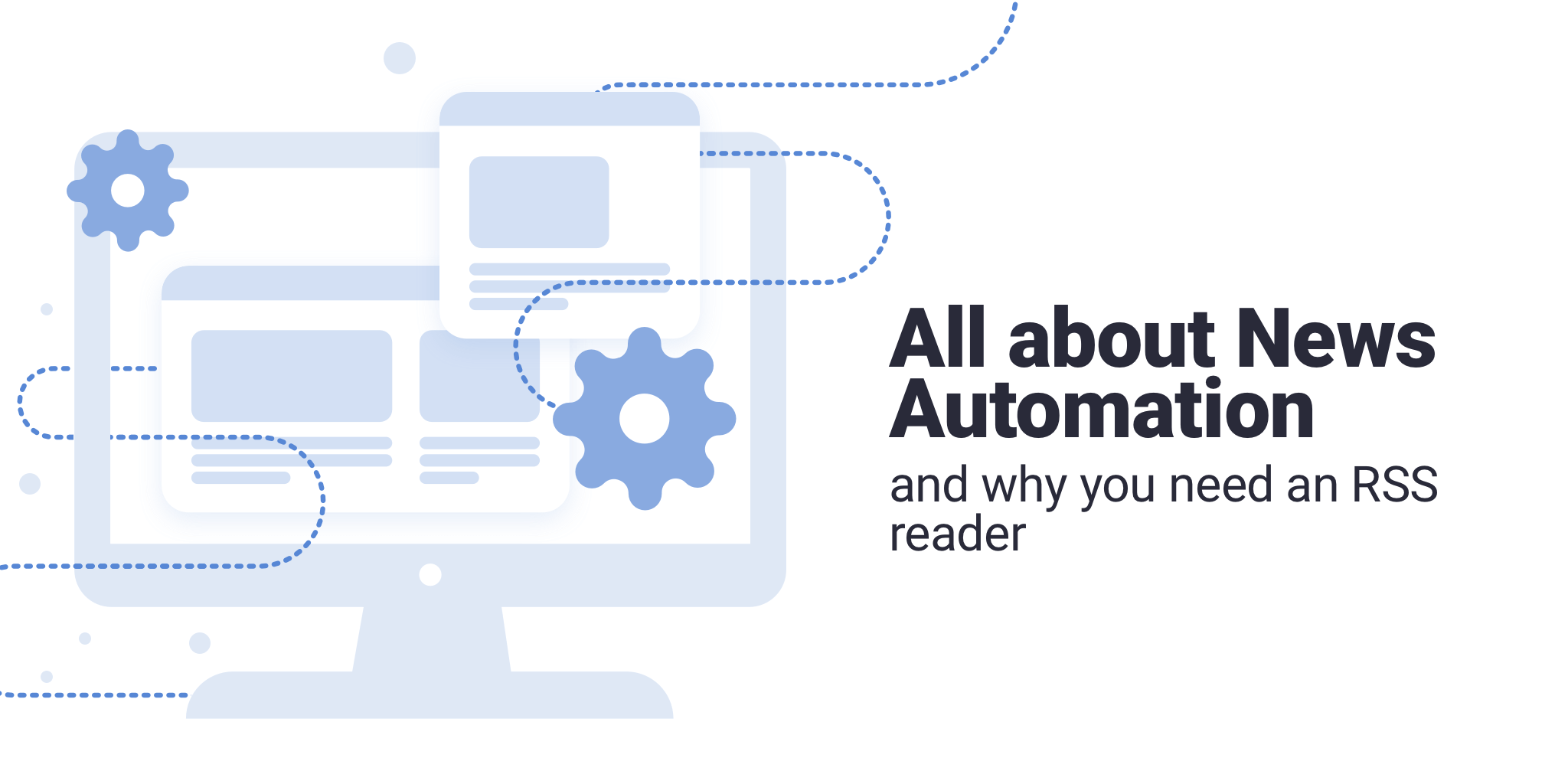 Automation has been the driving characteristic of the Fourth Industry Revolution simply referred to Industry 4.0. Although widely associated with the production and mechanical processes within manufacturing industries, automation has crept in industries previously considered impregnable by artificial intelligence – journalism.

Yet, here we are – participants in a news industry characterized by high velocity and automation in news publishing, news generation and news consumption.

What does news automation mean?

We can’t talk about news automation as a singular process as much as a state of the industry in its entirety. It’s as much as how AI and algorithms have the ability to pick up on stories before they break to machine learning and computer programs, which are capable of automatically producing news articles (you might encounter the terms robot journalism or algorithmic journalism). Smart, digital tools have always been welcome in the newsroom, and considering we live in a data-heavy world, journalism has to adapt to tell different stories.

News automation also exists in the way we read news as well through news aggregator sites such as Google News, Huffington Post, Gawker Media and Rotten Tomatoes, which all syndicate third-party content onto their front pages. Users also rely on RSS readers to curate their own feeds.

News automation concerns all players within the news ecosystem from publishers to journalists to end consumers and it’s through these lenses that we investigate tools for automation. Publishers, in general, view news automation as the automated generation of news texts based on structured data, and a lot of progress has been made in this line of work. Some with sizable budgets have the capability to develop their in-house tools. A key example here is the partial ownership in United Robots by Sweden’s MittMedia.

Others reach out to existing tools and companies. The Washington Post uses Heliograf (first developed for the 2016 Olympic Games) to automate news reporting, and this partnership has strengthened with Heliograf’s expansion to election results, crime, real estate and earnings announcements. Another high-profile collaboration is between Associated Press and the social media management platform SAM. By scanning social media channels, algorithms identify news events and alert AP’s editors in real time.

For readers, experts and data journalists, news automation takes the form of content curation and a matter of how news items are delivered for consumption. This is where RSS feeds become the best tools to consume a high volume of information in a time-conserving manner.

The Internet has no bounds; it stretches beyond the horizon. With all that freedom and vast expanse comes the purely logistical concerns about relevance – ‘how do you find exactly what you need in a chaotic environment”. It’s a challenge, which affects both publishers (as they have to go through a vast amount of online articles, social media posts or press releases to develop news updates) and end consumers, be they journalists or readers (as they rely on only the most relevant items within their professional circles).

Successful news automation hinges on the proper implementation of machine learning to discern patterns and topics within large data sets, which can include social media posts or press releases like what Cyborg does for Bloomberg. Filters built around trustworthiness, topical relevance and geographic location are also key points for the future of news automation.

Why use news automation?

News automation has already woven itself into the contemporary news landscape and as such, it’s not a matter of a conscious choice on your part as much as it’s a necessity. Media outlets have had an arduous road ahead in monetizing and keeping up with the incessant 24/7 news cycle. Simply put, there’s a high demand for news items at all times and there’s only so much a person can do.

A contributing factor to the rise of news automation comes from the limited resources available to news publishers. Given revenue challenges and short staffing, publishers face the unenviable task of going through a high volume of information often understaffed and overworked. Automation is a welcome break and a smart business decision. Work smarter, not harder, and tools exist that ramp up the publishing process without sacrificing journalists’ sanity.

News automation and the new era of journalism

It’s not only the accelerated publishing cycles, which encroach on journalistic work. The 2016 US election campaign marked a turning point for how media can be used to influence public opinion with the proliferation of fake news and misinformation. The liberal nature of the Internet naturally does away with traditional gatekeeping to publishing information, which has granted anyone with an agenda the platform to muddle the waters and blur the lines between facts and fiction.

Journalists are now in a difficult position, when reporting as fact checking and vetting take up even more of their time. News automation and news aggregation unburden journalists from the tedious tasks associated with their job description. The technology cuts through the menial tasks and free significant time for journalists to dive deep into bigger stories, while meeting news demands at a brisk pace. The journalistic work has its fair share of repetitive tasks and fears of the end of human participation in news reporting are so far exaggerated as the industry has always had its eyes on progress and performance.

News delivery belongs to the Internet now as can be seen in the steady decline in traditional news media (how often do you hear that print news is dead). Publishers stand to gain the most from news automation incorporated with social media posting, because the goal post has moved. Right now, it’s essential to break news first and land in readers’ feeds before anyone else as a story is breaking in real time.

Long-form journalism still has a place in this ecosystem, but there’s no denying that we consume news in a bite-sized format. Volume characterizes the current landscape and The Washington Post, for instance, has revealed that it publishes 1,200 stories, graphics, and videos per day. Algorithms and AI excel in both speed and efficiency compared to journalists through thorough examination of patterns in data. It’s the tool that gives news publishers a competitive edge on a global and local scale, which brings me to the next point.

AI has given data journalism an additional push in scaling up news production, especially when it concerns localized news – one of the trends that have surged in recent years. One of the big success stories is RADAR, the UK-based news service, which reports that through automation and data analysis, 40 data projects yield roughly 200 up to 250 localized news stories, resulting in a backlog of up to 10,000 published news items in the span of several months. Results unachievable through human labour alone.

News automation to improve your productivity

Are journalists’ days numbered? Should they pack up their desks and let algorithms run the show from now on? Fears surrounding the complete automation of journalistic work are exaggerated – AI is in no shape or form capable of reproducing nuance and depth humans can achieve. It is about deconstruction journalistic work to increments and deciding on what benefits from full automation and where journalists should step in. The Washington Post, Reuters and AP are at the forefront of innovative means to reduce redundant tasks – transcribing, fact-checking, parsing through social media posts, scanning through press releases and polling.

Perhaps the biggest area where automation is sorely needed is sourcing news events through social media, which challenges journalists in a manner of ways. There’s the insurmountable volume of posts being published every minute, on one hand, and the tendency for blatant manipulation and conjecture to infiltrate online spaces. It’s not uncommon for the biggest news agencies to design in-house digital solutions. Reuters has developed its own tool to identify news events and confirm trustworthiness, News Tracker.

How to set up automated news?

Right so how does RSS figure in all of this?

News automation flows in both directions – production and consumption. Readers stand to gain just as much as publishers from automation, especially in a work role of content generation (apart from the journalists who have to dig deeper into research). There has to be a way to consume all this content in an orderly fashion.

The tool for the job is RSS – Rich Site Summary, or Real Simple Syndication. Having hung around the Internet since its very inception, RSS has proven itself as a reliable curation tool within a digital age characterized by intense cycles of information production.

Think of RSS readers as specialty news aggregator sites like Techmeme, which syndicate highly specialized content from trusted sites. The only difference is that you have the full breadth of tools and filters to engineer a news feed that works for you.

RSS reader for all your news

RSS readers overhaul how you experience news and content overall. You declutter your reading cue, decrease the number of open tabs on your browser and gain complete control over what you’re reading and how. RSS readers are perhaps the Internet’s best kept secret, because they’ve generally fallen out of the spotlight within the last decade. Although not in their heyday, RSS readers have moved along the evolutionary chain and appeal to users with their powerful functions and filters.

RSS readers are specifically of use to professionals who have a narrowly-defined area of interest or expertise. There are several key advantages to using RSS: