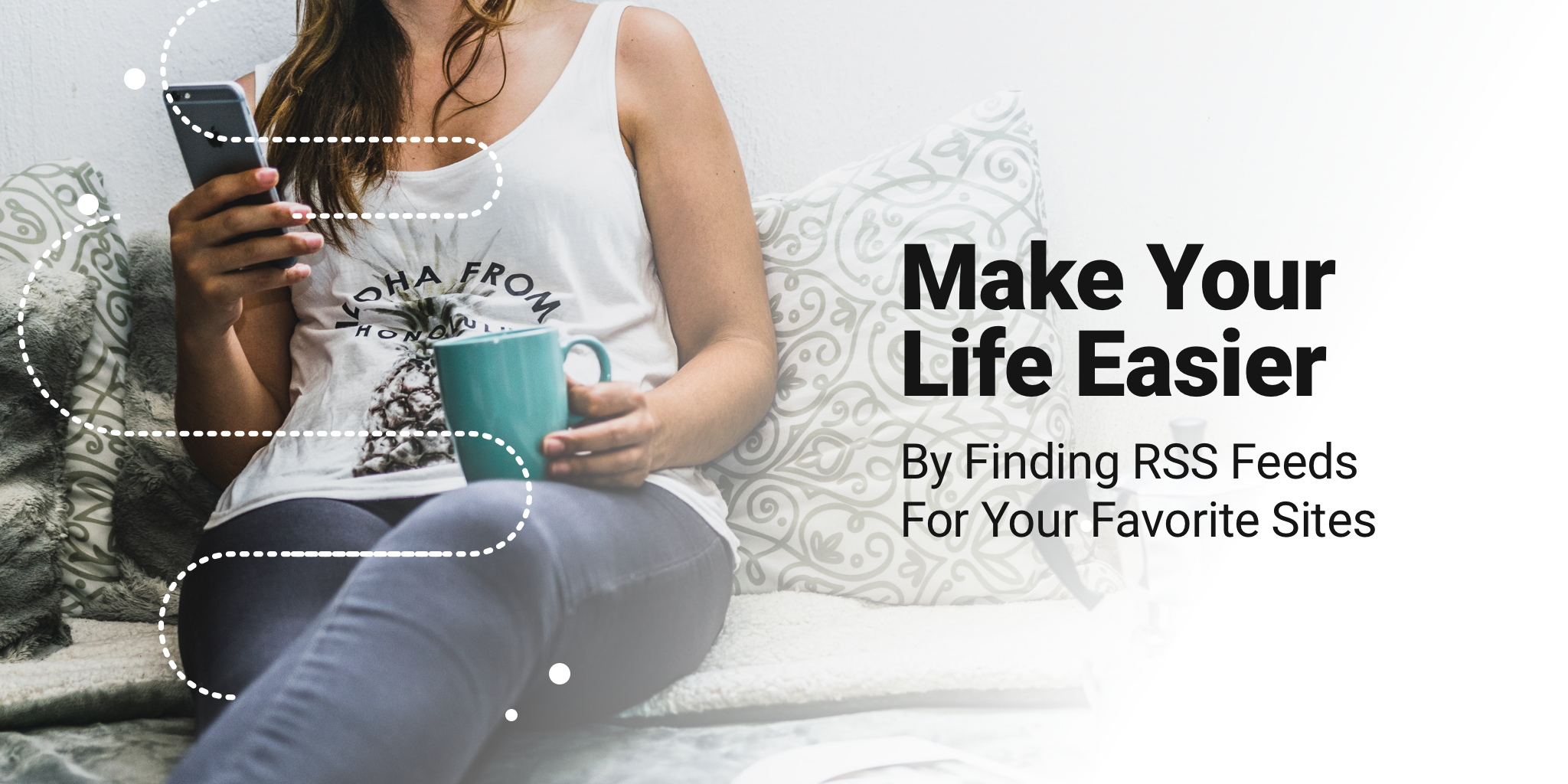 We will never stop advocating for RSS. RSS is not dead. It has refused to die and there’s a good reason for that. As long as there’s content on the Internet we can’t keep up with, RSS will be there to streamline our reading habits.

Just as Marie Kondo asks us what sparks joy and what we need in order to free space up in office and home, RSS asks you what’s essential to your digital diet. How can you improve your day-to-day on the Internet, trying to stay on top of news sources and industry websites and social media?

What is an RSS feed?

RSS has as long a history as the Internet itself. The protocol was first released in early 1999 on the My.Netscape.Com portal, but since then has become a major shaping force of the Internet of today. The creators behind RSS are Dan Libby and Ramanathan V. Guha. It has gone through several cycles of improvements and changes over the years and it’s the foundation for how we consume media today.

Are you following a celebrity on Twitter? Are you subscribed to a YouTube channel and wait for a new video pop up? A new podcast episode popping up on Spotify? That’s all thanks to RSS, which is quite impressive for a simple protocol meant to syndicate articles from blogs and news sites. Back in the early 2000s every website publishing regular content had an RSS feed, which gave users the means to follow multiple websites without having to visit each one individually.

If that sounds like something you need in your life right now, then it’s time to rediscover just how useful RSS is and you can do it right now. RSS is alive and well and has evolved to keep in step with Internet culture today.

‘Rich site summary’ or ‘really simple syndication’ – take your pick, that’s what RSS is shorthand for and it’s pretty self-explanatory. The main function of RSS is to crawl a website’s feed for any new updates and then add those new posts into a consolidated feed. This process is fully automated and once you log into your RSS reader you have a neat chronological feed from the publications you want to follow.

RSS further simplifies browsing through content by reducing each article to a few basic contents – a title, a link and either a short excerpt or a summary. If you’re interested in a particular piece, simply click and you’ll be directed to the page. Current RSS readers even display the entire post minus most of the multimedia files like pictures, gifs, embedded tweets and videos.

How does the technology work precisely? RSS feeds are written in XML files included in a site’s source code and are not visible for the user’s eye. Once you’re subscribed to a feed, the RSS feed reader will crawl over the site and take note of any new items published. The code is simple enough for most people to create and format, though most publishing platforms generate RSS feeds as soon as you create your site from WordPress and Blogger to Tumblr and YouTube.

How does RSS feeds make my life easier?

The Internet works in mysterious ways. What has once been deemed obsolete resurrects stronger than before. RSS feeds are not necessarily in the public consciousness again, but that doesn’t mean there isn’t a core audience that swears by their usefulness. There’s definite pressure in our work and personal lives to consume information as if we’re caught in a bizarre treadmill with no escape in sight.

What further compounds this pressure is the fragmentation of information delivery. You’re not just consuming information from sites. You’re also subscribed to newsletters. You’re on Facebook and on Twitter to pay attention to specific pages and accounts. You’re in LinkedIn groups or on work-related forums. Going around platform by platform not only sucks the time out of your day, but exhausts and overwhelms.

RSS consolidates all these information streams into one real-time feed. Earn your freedom through automation so you’re not trapped into menial, repetitive tasks and control information rather than have information control you.

What are the best RSS readers?

Surprisingly, the market for RSS feed readers has not shrunk. Rather the opposite, now that feed readers have evolved to handle more diverse streams of information from a wide set of platforms. You encounter a feed reader for every single purpose out there. Feedbin has been designed for the Twitter power users, who want to regain control over their feeds and narrow down their focus on specific feeds. NewsBlur services news junkies through specialization over news monitoring.

Nevertheless, there are overall great performers out there:

Find the RSS feeds of your favorite sites

Subscribing to RSS used to be strikingly simple back in the day. Websites would advertise their RSS feeds directly on the navigation bar and users could even click on the familiar orange icon right next to the URL displayed in the browser. With RSS falling out of favor, finding RSS feeds requires some detective work. The orange icon has been redesigned and more often than not, you’ll see a link to the RSS feed at the end of a specific post and that would be your entry point.

Websites, which follow a daily publishing schedule with multiple posts per day, tend to have their own specific page dedicated to their RSS feeds. News sites and specialized industry sources like the NASA website understand that readers have different fields of interest and naturally curate content by category in RSS feeds for an easier time browsing. You subscribe to a single topic and receive the content most relevant to you.

In those cases, when an RSS feed is nowhere to be seen, there are different approaches you can take to find a site’s RSS feed. You should be prepared to find no RSS feed at all as more and more websites don’t support RSS anymore.

Look into the source code

A simple investigation into a site’s source code will show whether there’s an RSS feed to be found. Not every website advertises their RSS feed readers and there are two main reasons. An RSS link in a visible position might interfere with the design and RSS users have more or less gone down in numbers, so site owners support RSS, but don’t make it a prominent feature in their site design.

On Chrome, finding an RSS feed is a straightforward process in three steps.

Right-click on a website and then select ‘View source code’ to open up a window containing the site’s code. The best chances you have to locate an RSS feed is to go to that part of the site where new content is published.

Once you’re face to face with the code, either select Find from the right-click drop menu or use the Control + F shortcut on PC to open the find function. If you’re using Mac, your shortcut is Command + F.

Type in RSS and see whether anything pops up. In case you get a hit, you need to look for the link, which may or may not be more than one. From here on out, all you have to do is copy the link and paste it in your RSS feed reader to subscribe.

Different website platforms employ different models to create RSS feed links, which may not be readily visible to users. Not every website runs on WordPress, which automatically generates RSS feeds for its sites, though roughly a third of all online destinations on the web are WP-based. You may need to know how certain platforms approach feed building.

TUMBLR: Tumblr supports RSS and you will find every blog to have its own unique RSS feed. All you have to do to find it is attach “/rss” at the end of a blog’s URL and you’re ready to add a Tumblr blog to your RSS feed. It should look something like this – https://example.tumblr.com/rss

BLOGGER: Blogger is the Google-owned blog-publishing platform and main rival to WordPress, though we know which platform won that battle in the end. There are different ways to find RSS feeds on blogger or enable one, but the easiest would be to attach feeds/posts/default to the end of a blog’s URL. Theoretically, it should be like this – example.blogspot.com/feeds/posts/default.

YOUTUBE: You won’t find a YouTube channel’s RSS feed, because the channel URL doubles as an RSS feed. Copy the channel URL and use that link to subscribe through your RSS reader. If you want a handy place to survey all the channels you’re following on YouTube, here are complete listings.

Following an RSS feed to the RSS feed reader was how we did things in the past. Right now, the feed readers of today have a search bar, through which you directly locate the websites you want to follow and subscribe. Inoreader makes the process extremely easy and user-friendly. You can search by the website’s name or copy and paste the site’s URL. If the site has an RSS feed, you’re automatically subscribed to its content and that’s all to it.

What if there’s no RSS feed at all? Inoreader doesn’t back down from a challenge. Where there is no RSS feed, Inoreader creates one through the Web feeds function. Through this feature, you’re shown three sample RSS feeds for you to choose from and subscribe to the site’s content even if it doesn’t support RSS.