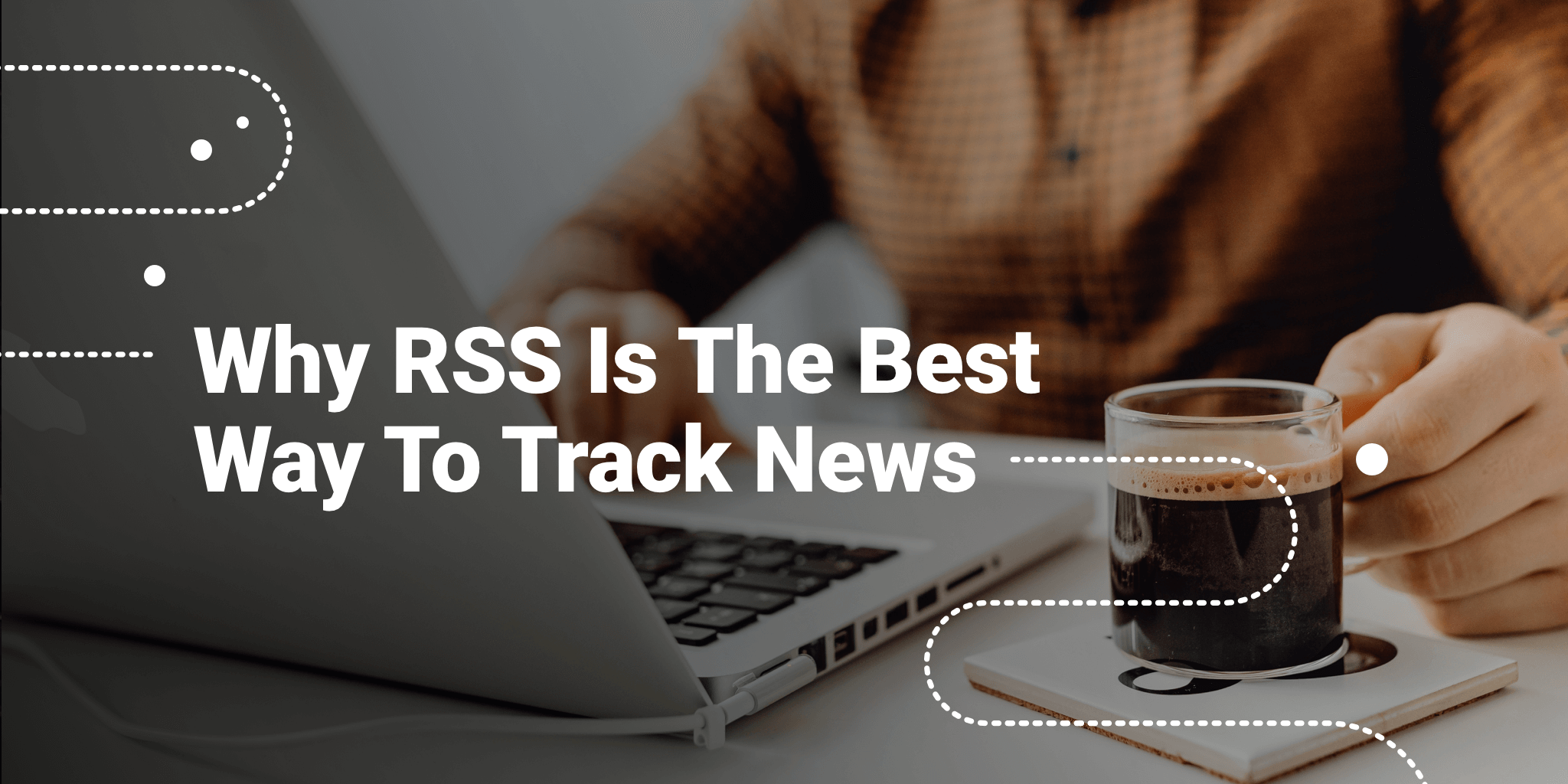 Tracking the news itself can feel very much like a full-time job in itself. The news cycle has no inclination to slow down and the responsibility to remain within step falls on journalists and those reliant on news.

The chief obstacle is certainly the volume of headlines generated within an hour (within minutes on a particularly fast news day), but also the distribution of news. Online publications, news sites and social media accounts compete against each other to the punch.

What happens to news consumers? They’re caught out at sea during a storm and their compass is not working. To stretch the metaphor to its absolute limit, RSS is the calm waters where users can rest, catch their breath and chart a course back to the harbor. Through RSS news consumers take back control over their news feeds.

How does RSS work?

RSS is simplicity itself. No wonder, the format dates back to the 1990s – where a lot was achieved with little. In short, RSS syndicates content from multiple sites and directs it to an RSS feed reader.

In essence, users can browse through all the blogs, news sites and government sites near and dear to their heart without having to manually visit each site URL. A key selling point during the initial blogging craze at the time of Blogger and LiveJournal.

It’s worth noting RSS standardizes formatting for presenting text and images and articles appear stripped down for easier consumption. RSS readers are the applications that syndicate the content.

In the past they used to be web-based, but now every reader has its own mobile application for Android and iOS. Readers showcase new articles in a summarized, chronological list.

The RSS feed is what lets a site communicate with an RSS reader. Without an RSS feed, users are not able to subscribe to a site’s content in their reader. It’s a trend that’s been on the upswing for years, because sites want readership and hits on their main page, not from a third-party service. So RSS has been pushed out and many sites don’t maintain RSS feeds at all. Mozilla stopped support for RSS further sending a strong message against RSS. Though really, there are workarounds, if you want to subscribe to a site badly enough.

So what’s an RSS feed? It’s an XML file found in a site’s source code, which contains information on every post published on a website. Once an article is published on the site, the RSS feed adds a new entry, which is then crawled by the reader. Each new article is reduced to three components – a title, a link and a description, which can also be an excerpt of the article itself rather than just a summary.

The Internet – as it’s currently designed and run – doesn’t have anyone’s best interest at heart. All players want time, attention and engagement of their audience. We’re all primary targets and it’s not a new discovery. Think pieces on ubiquitous distraction, the total breakdown of face-to-face communication skills and social media addiction have become a fixture and a running commentary on how we exist on the Internet.

There’s only so many sites you can devote your time and attention, and when they fiercely compete to keep you logged on and zoned out of everything else, you’re at a disadvantage. RSS is a way to rebel against the attention economy as it currently stands and fully restructure how you receive the information you need. RSS has no clever hook to keep you glued to your phone. Rather, it’s pure convenience.

Content aggregation fully eliminates any decision making processes surrounding which sites to frequent, in what order and pay attention to what. It’s never either or, when you can have it all – an aggregated overview of all the latest news and updates as they’re being published and in order of publication.

Aggregation coupled with curation is what pushes RSS to the foreground as an effective tool for managing your online reading. You can have the entire world saved in your RSS world, but none of that is useful, if you can’t find a single article. Scrolling through your feed works up to a point. Journalists have to keep an eye out on numerous publications and people at all times, so it’s not realistic to expect to perform searches like that manually.

Search is perhaps the best new development of modern RSS readers as you’re in a position to go through your subscriptions based on specific keywords and make the search as simple or as complex as you need it to be. Depending on the RSS of your choice, users are able to extend their searches to the reader’s entire database like Inoreader does. Perhaps even more useful is to create complex keyword searches, which you can save and keep active for as long as you like.

Filters and folders add another layer of distinction and structure within your general subscriptions. Through tags and labels, you can pinpoint exactly the type of article you need, when writing your own article or doing a report on industry trends. Inoreader gives users the opportunity to hide or show content based on a broad set of criteria from keywords to author.

Why does RSS beat social media and news sites?

RSS may be old. It may be past its prime, certainly considered dead by many. Yet, it runs circles around social media platforms and news sites in terms of usability and convenience.

Within the grip of the attention economy, media consumption has become a near impossible task – simply because the tools that deliver blogs and news articles and videos are designed to hold you in one place. One post is never enough once you log on and you’re bombarded with a new update, then another, and another, another until you’ve lost an hour or even more before you realize it.

RSS operates with a user-first approach – you are here to do one job and RSS helps you do that in no time and at your own pace. What’s more you conveniently receive fresh updates from multiple sources in one single dashboard and within a chronological order. That’s how you’re able to follow a story as it develops rather than reverse engineer the sequence of events based on the tweets and Facebook posts that arrive to you out of order.

It’s rather ironic, because social media killed RSS more or less, because it made it easy to follow many publications at one as they published new content.

Journalists are on a wild ride the moment they log online for work; even off hours. Scandals, news on economics and natural disasters, and political upheavals round out every minute. It’s tough to track what headlines are breaking, what the top news of the day is going to be and what the overall number of stories is going to be. Consuming media through multitude of different channels makes this all the more time sucking and draining experience.

RSS captures the entire catalog of your subscriptions in one place. No article is missed. No headline is unaccounted for and the entire publishing done for the day is registered and saved for a considerably long time so users can browse through their catalog and research the titles they want. That’s control over your online reading not available anywhere else. The main virtue of RSS is that it’s always updating. In translation, the headlines come to you as soon as the publish button gets hit and you don’t have to scout Twitter every single second to receive it.

That’s how you remove significant portions of stress off journalists’ shoulders, who are already under so much pressure to meet unforgiving deadlines.

How do we all encounter news? A friend has messaged us the link with some visceral reaction. Or we’ve seen it shared on social media with some kind of commentary either by people in our social bubble or a political / public figure. Or in relation to another story.

Story is an important word to note here. News stories receive some sort of narrative whenever they’re shared on social spaces and what narrative you encounter first slants how you view the story even before you click on the headline. It’s a normal subconscious process that happens automatically. The use of emotional language to promote and disseminate news (not to mention in the writing of news itself) sways public opinion in fine ways – either convinces you to believe wholeheartedly or distrust, fear from and anger by whatever is happening.

RSS strips news delivery from this particular layer so you’re presented with the dispassionate facts and numbers. Yes, bias does exist. It’s in the sources you choose to follow – that’s easily remedied by broadening your subscriptions to avoid the social bubble traps. It’s in the face of the author, but that’s where you’re able to better decide for yourself what’s true and what’s not without being told what to feel already by the writing style.

Easy to get, easy to read, and easy to share

Oh, the convenience of it all.

To have all your news headlines neatly stacked in chronological order – that’s how journalists and other data-reliant professionals thrive on their workplace. RSS automates the distribution of news and other forms of relevant content (newsletters, blogs, podcasts, social media searches), so users redistribute their work time in favor of actual work rather than hunting down breaking stories. No alternative exists to having it all, updated in real time.

RSS readers have also perfected the reading experience. On one hand, articles arrive stripped of their formatting and multimedia files to only the essential text (caveat – some RSS readers manage to retrieve images and video). As a bonus, users skip all the pop-ups and AI chats, which are just so endlessly annoying and pointless. The stripped-down layout and formatting also shortens the loading time as some news sites can be clunky and heavy on mobile, whereas RSS reader apps run in seconds.Sharing capabilities are also included. Sync your on social media profiles and you can click on the share buttons within the reader to quickly share a title that speaks to you. More than that, you can send the link to a service like Evernote, which can be accessed by your own team. Through careful integration with platforms like Zapier, the article you want to share can be linked to messenger apps like Slack or Discord and then saved further in a Pocket account.